Jeremy Wade is a dynamic instructor, composer, and performer based in the Central Kentucky area.  He has served as the Director of Percussion at George Rogers Clark High School since 2016, and at Lexington Christian Academy since 2008.  He teaches beginning dance and bodhrán for the Kentucky McTeggart Irish Dancers (KMID), and is Co-Director of the Kentucky Irish Music Academy (KIMA).  In addition to providing class/ private instruction, he is an active clinician, teaching workshops at schools and Irish music festivals throughout the Ohio Valley.

A versatile performer, Jeremy has played with many ensembles ranging from symphony orchestras to rock and jazz bands, and has a robust history in the marching arts.  He began his marching career with Lafayette High School (2003-2006), and continued through college as a member of the University of Kentucky Wildcat Marching Band (2007-2010).  He was a charter member of the Tates Creek Indoor Ensemble, playing timpani for the 2007-2009 & 2011-2012 seasons, and marching snare in 2010.  In the summer of 2011, he was selected as the timpanist for the Spirit of Atlanta Drum & Bugle Corps.

Motivated by a lifelong interest in Irish Traditional Music, he purchased his first bodhrán in 2009.  He currently plays with local trad duo, Set Course, along with award-winning fiddler, Justin Bridges.  In addition, he studies Irish dance with KMID (6-time Mid-America Oireachtas Adult Céilí Champions) and performs as a member of their faculty dance company.

Jeremy has been heavily involved in musical theater over the last decade, regularly performing in the pit orchestras with several local theaters.  He has served as the “house percussionist” for Lexington Christian Academy since 2013, and played for the Lexington Children’s Theater from 2016-2018. 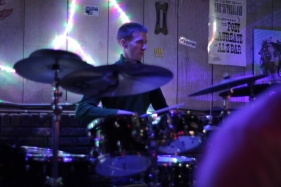 From 2010-2015, Jeremy served as the drummer for LifeGate Church, and has since filled the same role for Family Worship Center (2016-Present) and Tates Creek Christian Church (2020-Present).  He performed and recorded with local rock band, Analog Apostles from 2013-2014, and is a current member of the Central Kentucky Concert Band.